Due to the timing of inclement weather and poor road conditions, all KCSD schools & offices will now be closed today, Thursday, December 15.

No remote work or learning is expected.

Unfortunately, The Kennett Consolidated School District’s (KCSD) application for Flexible Instructional Days (FID) was denied by the Pennsylvania Department of Education (PDE) on a technicality. As a result, during the 2022-23 Academic Year, KCSD must observe traditional district closures in the event of inclement weather. Any make-up days will be observed at the end of the year. If this becomes necessary, graduation celebrations will remain unchanged.

We apologize for any inconvenience this causes you, and hope you know that every effort was made to appeal PDE’s decision.

Log into the Skyward Family Access Portal to be sure you have an email, cell phone and home phone on file. Text “Y” to 67587 from your cell phone to receive text messages.

Log into CSIU to be sure you have a cell phone and home phone on file. Text “Y” to 67587 from your cell phone to receive text messages.

Ensure that your email, cell phone and home phone are on file with your contracting agency. We regularly update our records to reflect what our partners share with us!

The Finance Committee will host its December meeting in the library of the Mary D. Lang Kindergarten Center at 7:00 p.m. on Monday, December 12, 2022.

An Update on Recent Threat at KHS

Please be advised that the Kennett Square Police Department has provided the following update regarding the recent threat made against Kennett High School (KHS).

On November 3, 2022, at approximately 9:20 am, a bomb threat was phoned into Kennett High School (KHS). In coordination with the Kennett Consolidated School District (KCSD) administration and the Kennett Square Police Department, KHS was evacuated and students were moved to a safe location. The safety of our students and staff is our very first priority. Please rest assured that no threat is ever ignored and will always be investigated to the fullest extent of the law.

As a result of the ongoing investigation, a 17-year-old male from Wilmington, DE was identified as the primary suspect. The juvenile and his family were interviewed by Kennett Square Police Detectives and the juvenile fully confessed to the bomb threat. A Juvenile Allegation for felony terroristic threats and related charges was completed and will be submitted to the juvenile courts.

The Kennett Square Police Department would like to thank the KCSD administration and staff for the ongoing partnership and collaborative relationships in place to address these significant incidents. Working together, we continue to strengthen the safety of our students, staff and community.

The Kennett Consolidated School District would like to sincerely thank the Kennett Square Police Department and all of our local law enforcement agencies for their partnership in keeping our students and staff safe.

As always, those with questions are invited to contact KCSD Communications Specialist Nikki Laws at nlaws@kcsd.org or (610) 444-6646.

The Board of School Directors will hold its Reorganization and Regular meetings in the library of the Mary D. Lang Kindergarten Center beginning at 7:00 p.m. on Monday, December 5, 2022.

As a reminder, the Kennett Consolidated School District (KCSD) will be closed beginning Wednesday, November 23, in celebration of Thanksgiving. We look forward to seeing everyone again on Monday, November 28.

We hope that the holiday season will be a happy time for all. However, please know that help is here if you need it.

In an emergency, the best course of action is always to call 911. Otherwise:

Like others at this time of year, we are reflecting on what we are most grateful for. It is both our passion and our privilege to share the gift of learning with our students in partnership with you, our professional educators, families and friends.

Wishing you and yours a restful and well-deserved break!

At approximately 11:45 a.m. on November 22, Kennett High School’s (KHS) fire alarm activated as a result of cooking in a classroom. All KHS students and staff were safely evacuated. The Kennett Borough and Longwood Fire Companies have since cleared the building and the day will continue as normal.

The Policy and Curriculum Committees will host their November meetings in the library of the Mary D. Lang Kindergarten Center beginning at 5:30 p.m. on Monday, November 28, 2022. 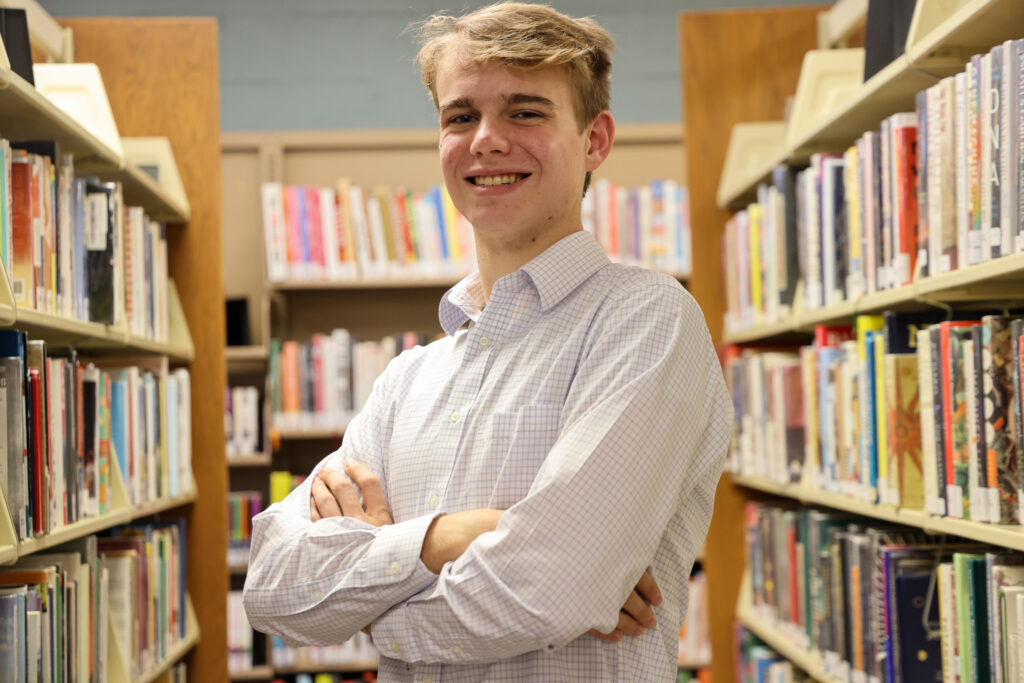 This Summer, the Senior was one of just 120 students selected to participate in the U.S. Department of State’s Youth Ambassador Program. Wilson traveled to Ecuador for two weeks, where he advanced his own leadership skills and fostered mutual understanding.

“I learned a lot,” he said. “It was just an amazing experience overall. Now that I’ve come back to the United States, I’m working on completing a required community project– an initiative called Juntos.”

Juntos means “together” in Spanish and, according to Wilson, its primary goal is to create a safe space for language learning.

“Kennett is a bilingual community,” he reflected. “Growing up here has made me realize that people need to be able to talk with one another. I took the initiative to learn Spanish. I think it would be easier for others to learn a language if they had a way to immerse themselves.”

Wilson currently hosts a meeting every Thursday at 5 p.m. in the Kennett Library. He has extended an open invitation to anyone who might be interested in attending the next session.

In the Fall, Wilson will be off to college– Princeton, the University of Virginia and Vanderbilt are his top picks. Until then, his plans for growth include creating official clubs at Kennett High School and Kennett Middle School (KMS)– as well as branching out beyond the District.

“Right now, we are largely students. I haven’t yet been able to reach out to many adults,” he said. “But I want to help everyone to make friends and to feel more a part of the community.”

KHS Principal Dr. Lorenzo DeAngelis praised Wilson’s efforts. “Matt was our Student of the Quarter for the Longwood Rotary and, to be honest, it was a very easy decision! We are all excited and looking forward to what he continues to bring to this world.”

Superintendent Dr. Dusty Blakey added “Matt is an example that we all can aspire to, as he works to unite our community by recognizing our bilingual strengths and by organizing a school-based club that brings together both English and Spanish speakers. He recognizes that we are all stronger when we work together as one.”

There will be early dismissal for:

There are no conferences at Kennett High School and, as a result, students will arrive and depart on time.

If you scheduled a conference on November 17, 18 or 21, your student’s teacher will communicate a confirmation with you soon. Please plan to arrive on time and come prepared!

Everyone is encouraged to review their child’s report card and write down questions for teachers regarding their academic and behavioral progress.

Students currently in fourth through ninth grade should have also recently received last year’s Pennsylvania System of School Assessment (PSSA) results. Note, this assessment is just one of many ways we measure success.

Those who requested a virtual meeting are invited to learn more about how to install and use Microsoft Teams on your phone, tablet or computer via video or PDF guide.

Questions? Please contact your student’s school at any time for bilingual support.

KMS Families are invited to join their students for the Band & 6th Grade Orchestra Concert!

The KCSD Communications Committee will convene for its February meeting in the library of the Mary D. Lang Kindergarten Center. Additional details, including an agenda, can be accessed online.

The KCSD Finance Committee will convene for its February meeting in the library of the Mary D. Lang Kindergarten Center. Additional details, including an agenda, can be accessed online.

Together with our public safety partners, we’ll brief you on investigations into Fall incidents at Kennett High School (KHS) and Kennett Middle School (KMS). Chester County Safe Schools will then share how parents can partner with us to keep our schools safe. Finally, you’ll have an opportunity to have your questions answered! Kindly register to attend.

The KCSD Board of Directors will convene for its February meeting in the library of the Mary D. Lang Kindergarten Center. Additional details, including an agenda, can be accessed online.

Café en Familia is the Kennett Consolidated School District's premier event for all K-12 families! Please join us for monthly coffee and conversations on the topics most critical to your student's success.